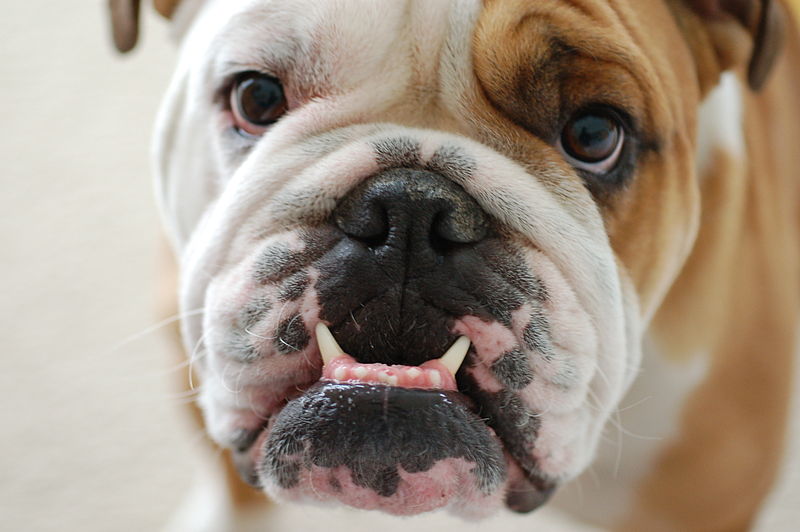 Brachycephalic means short-headed (short-nosed), and many breeds of dogs have been bred for this type of appearance. Bulldogs, boxers, Boston terriers, Pekingese, pugs, and shih tzus are all examples of breeds with a short-nosed, “pushed-in,” or brachycephalic, face. The bones and associated structures of the head are shaped in such a way as to give these dogs the typical appearance of their breed. However, this shape also causes mild to severe breathing problems because the upper airway often is too small—especially the nasal passages, glottis (throat), and trachea (windpipe).The term brachycephalic airway syndrome describes the anatomic abnormalities and the respiratory problems associated with having an excessively short nose and face. This applies to short-nosed dogs more often than short-nosed cats like Persians. There are different ways in which the upper airway of brachycephalic dogs can be misshapen and cause problems. Any or all of them may be present in a particular dog.

The condition tends to slowly worsen over time. Increased resistance of airflow over a long period of time can cause increased obstruction and weakening of other parts of the throat, and complications such as laryngeal collapse can occur. Such severely affected dogs may become cyanotic (bluish tongue and gums caused by oxygen deprivation) and experience exercise intolerance and syncope (fainting). These very serious symptoms are exacerbated by obesity, hot weather, and excitement, and dogs with brachycephalic airway syndrome should avoid these conditions, especially if respiratory difficulty is noted to worsen. If an episode of dyspnea (difficulty breathing) is severe enough, the dog could die from brachycephalic airway syndrome.

Confirming that brachycephalic airway syndrome exists in a certain dog is based on your description of the symptoms you have observed, any medications or treatments and whether they made any difference, and so on. Your veterinarian will be interested in details such as when the breathing difficulties occur, how severe they are, and if they are worsening (more severe, more frequent, or both) over time. There are many respiratory disorders that produce symptoms similar to brachycephalic airway syndrome but that are completely different disorders. Therefore, your veterinarian will want to identify whether any of the anatomic components of the syndrome is present in order to choose the best treatment.

The physical examination can confirm stenotic nostrils (small nostrils), but the other three components of the syndrome require special examination. Under sedation, an inspection of the larynx using a laryngoscope (speculum with a light) can detect an elongated palate and everted laryngeal saccules. Radiographs (x-rays) of the chest may be taken to rule out other airway of lung diseases and to visualize the size of the trachea.

It is important to realize that this condition is chronic and progressive. If you are living with a brachycephalic dog, you should discuss possible problems with your veterinarian and follow instructions. Many mild cases can be managed at home by avoiding stress, avoiding overheating, and preventing obesity (see below). In other cases, surgery may be recommended to trim excess soft tissue from the nostrils, palate, or larynx. Overall, prevention and precaution are the keys to taking care of dogs with mild or moderate brachycephalic airway syndrome.

Brachycephalic airway syndrome does not necessarily affect life expectancy. However, an episode of respiratory distress can quickly worsen into an emergency situation. You must monitor your pet closely to avoid these situations and to intervene early if complications (such as replacement of the pink color of the gums and tongue by a blue color—cyanosis) occur. A dog having difficulty breathing can easily panic and increase his or her respiratory efforts, which in turn can create swelling in the structures of the upper airway and cause a self-perpetuating decline in respiratory function. In such cases, it is important to keep the animal cool and calm while heading directly to a veterinary facility.

Home management consists mostly of avoiding situations that can lead to respiratory problems. Obesity increases the work of breathing, so it is important to make sure that dogs with brachycephalic airway syndrome maintain a lean body weight. Overheating and prolonged panting can be dangerous to these dogs. Keep your dog cool on hot, humid days and never leave him or her in a car, outside on a hot day, or in an enclosed kennel. Be careful to avoid allowing overexertion on walks or at play when the temperatures outside are high.

Stress also poses a major risk. In dogs with brachycephalic airway syndrome, it is important to discourage excited behavior such as persistent barking at visitors or pulling on a leash. Use a harness instead of a collar to avoid pressure and swelling to the neck.

If your dog has this condition and it worsens to the point of requiring hospitalization in an emergency situation, treatment may include the following: tranquilization to calm the dog down, antiinflammatories given by injection to decrease swelling in the nose and throat, and supplemental oxygen. The veterinarian may need to perform a temporary tracheostomy (surgical opening into the throat) if the condition has reached a life-threatening state. As for humans, such a procedure involves a plastic tube that is surgically placed into the trachea for a few hours or a day or two to bypass a swollen or collapsed larynx so that the dog can breathe.

If your dog has brachycephalic airway syndrome, your veterinarian will be able to help you decide if surgery is appropriate to increase the size of the airway and reduce the risk of future breathing difficulty. Trimming small nostrils or a long palate might be performed when your dog is a puppy to try to avoid later problems. Once problems occur, referral to a special surgery facility may be necessary since the surgery is often delicate, and complications if the surgery if improperly done can be difficult to manage. Surgery most often involves resection (trimming) of stenotic nares to widen the nostrils, resection of the soft palate, and/or resection of everted laryngeal saccules. Other components of the syndrome, such as the small (hypoplastic) trachea, cannot be corrected with any medicine or surgery. An important consideration is that surgery may be most effective if performed on young dogs before there is a problem. Once the soft tissue structures of the larynx are chronically inflamed, surgery may be less helpful.